15 Things to do in Louisville, Kentucky

The city of Louisville is a popular place to travel with attractions like the Kentucky Derby, bringing hundreds of thousands of people to the city. We went on an off time and really enjoyed getting to know the city of Louisville. Here are some of our favorite places to visit in the city and let us know what we left off in the comments. 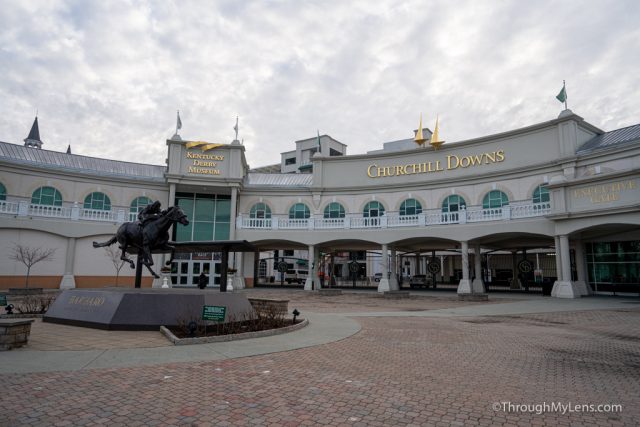 Churchill Downs and the Kentucky Derby is probably the main thing Lousiville is known for. This horse race is watched by people all over the world, and it brings tons of visitors to the city. If you are here when the race is not happening though, and you want to learn more about it, the Kentucky Derby Museum is where to go. The museum is attached to Churchill Downs, and your ticket purchase gives you access to a short 30-minute tour that takes you into Churchill Downs itself. Plus, the exhibits here are interactive and fun, and they have a resident thoroughbred you can see outside of the museum as well. I didn’t know anything about this race before I visited, but I enjoyed learning more. 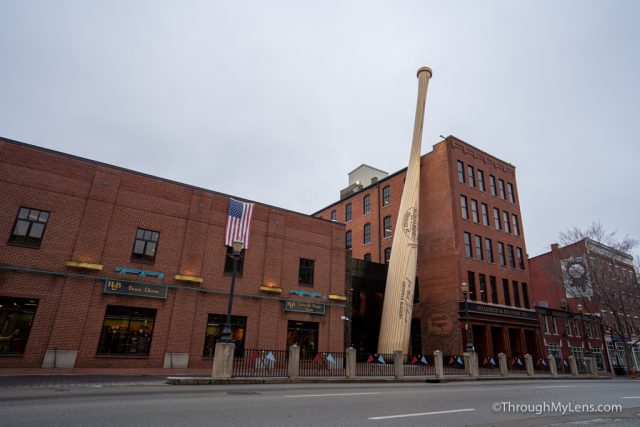 Louisville Slugger is one of the most well-known places to see in the city. The giant bat that stands outside of the building is a great photo spot, and the museum itself is a blast, even if you are not a baseball fan. We walked around and explored the exhibits, getting to hold actual game bats and learning about the company history. We also went on a tour, but no video or photos were allowed on the tour, and it walked us through the factory to see the bat making process. I highly recommend a visit here while in the city. 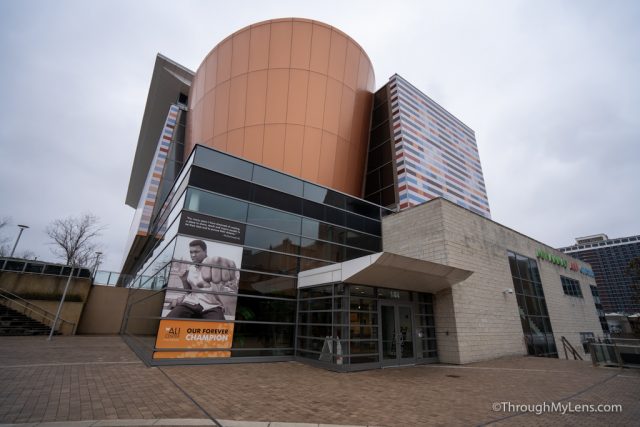 Muhammad Ali is one of the city’s most famous celebrities. The renowned boxer and humanitarian grew up in Louisville, and you can still see the house that he grew up in. The main draw though, is the Ali Center right in the middle of the city. This large museum has tons of great information on his life and career with interactive exhibits throughout. It also spotlights all of the humanitarian efforts he contributed to later in his life, and you leave the museum with a considerable amount of respect for this larger than life man. 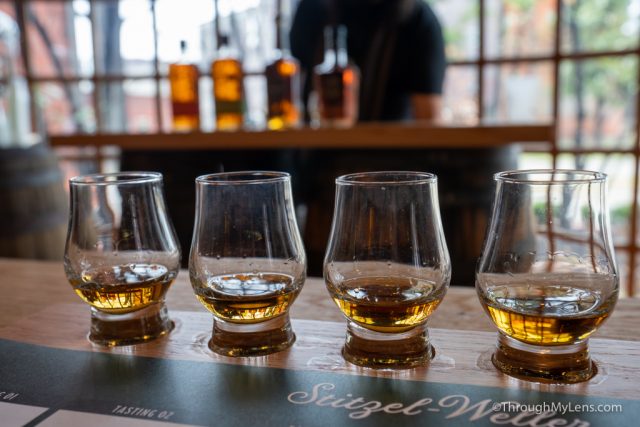 If you like whiskey and you are over 21, then something you must do in Louisville is to visit a few of the distilleries on the Bourbon Trail. I will have an entire video on the bourbon trail soon as Amie and I visited a bunch of distilleries. Still, a few spots I loved near the city were Evan Williams for an interactive bourbon experience; Angels Envy for their beautiful urban distillery and Stitzel Weller for their historic property. Of course, you could drive 45 minutes and see places like Jim Bean, Makers Mark, Buffalo Trace, or Woodford Reserve as well. Lots of bourbon in and around Louisville. 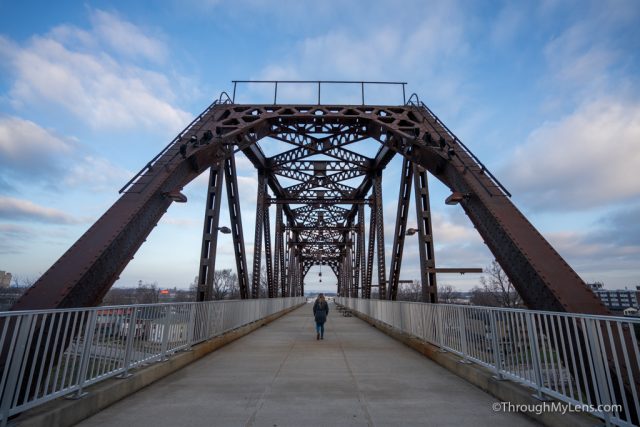 Louisville has many bridges heading over the Ohio River and connecting the city with Jeffersonville in Indiana. One of the bridges is a pedestrian one though, and it is a great way to experience the city from a new angle. The one-mile bridge takes you over the river with lots of angles to see the city and the other bridges, as well as benches to sit and relax at. Also, the bridge is lit up at night, changing colors constantly, making it fun to see at day and night. 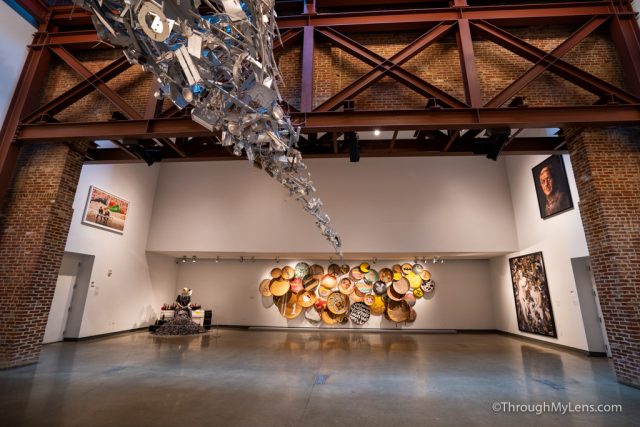 Near the Ali Center, 21C Museum and Hotel is exactly that, a museum and a hotel. Even if you are not staying at the hotel, you need to visit as it has a great free museum. Starting with the giant statue of David and the limousine outside, the museum also has some great exhibits inside with unique art and an interactive video wall. Make sure to check out the men’s downstairs bathroom, which has a two-way mirror and a waterfall urinal, and to see the smoke machines that blow smoke rings outside. 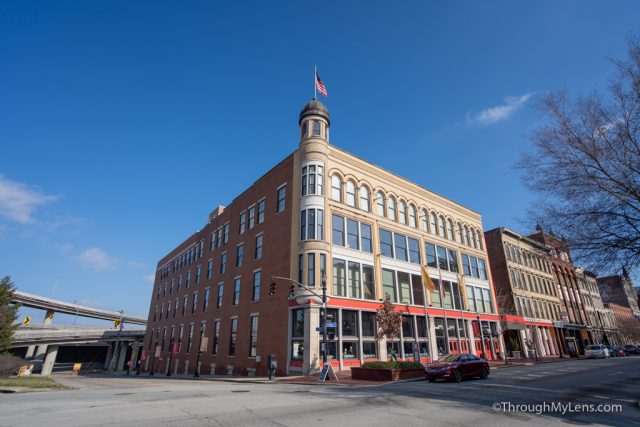 Frazier Museum is a Smithsonian subsidiary, and it has many great exhibits. We went mainly because it is home to the bourbon trail welcome center and has an extensive exhibit on Kentucky Bourbon, but we enjoyed seeing the other exhibits they had as well. Some of the standouts were the exhibits on Kentucky music and being able to see one of Jesse James’s guns. Many of the exhibits are interactive as well, which makes them even better. 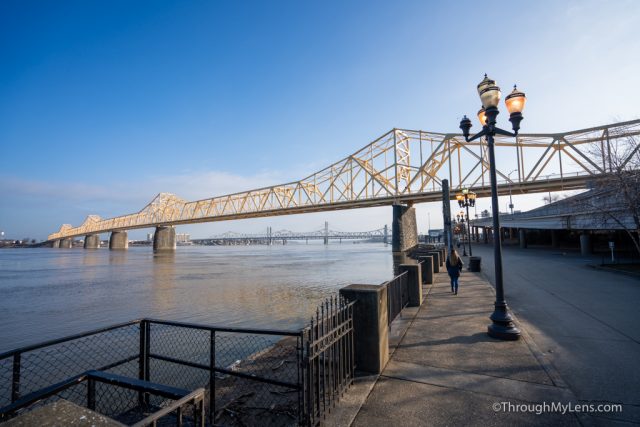 Louisville is located right on the Ohio river, so a few of the recommendations have to do with the water. The Louisville Riverwalk, goes along the river and past the famous Belle of Louisville. The trail goes under the George Rogers Clark Memorial Bridge, which is fun for photography and past the Joes Crab Shack over to Waterfront Park. It was winter when we were there, but I imagine this park would be cool to visit in the summer. Also, if you are looking for a fun spot for a drink after your walk, there is a pub called Troll Under the Bridge you can visit. 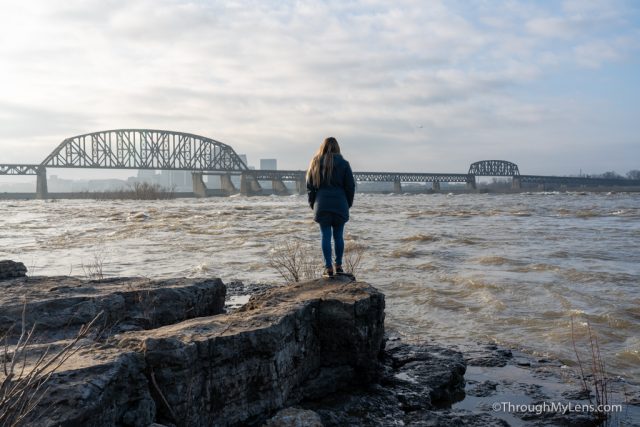 This recommendation is technically in a different state, but it is less than 10 minutes from Downtown Lousiville, so it is worth the stop. The state park is the starting point for Lewis and Clark’s journey west, and it has a plaque and statue to commemorate it. It also has a beautiful visitor center and great views of the “Falls of the Ohio River.” Lastly, when the water is low, it is a great place to see fossils in the rocks as well. 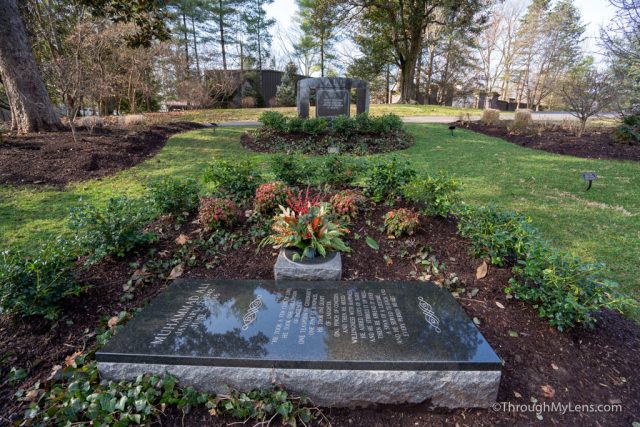 Cave Hill Cemetery is on the national register of historical places, and it is over 290 acres right outside the downtown area of Louisville. The cemetery is notable as the resting place of many revolutionary war soldiers, and it also houses the grave for Muhammad Ali and Colonel Sanders as well. It is worth a drive through when you are in the city. 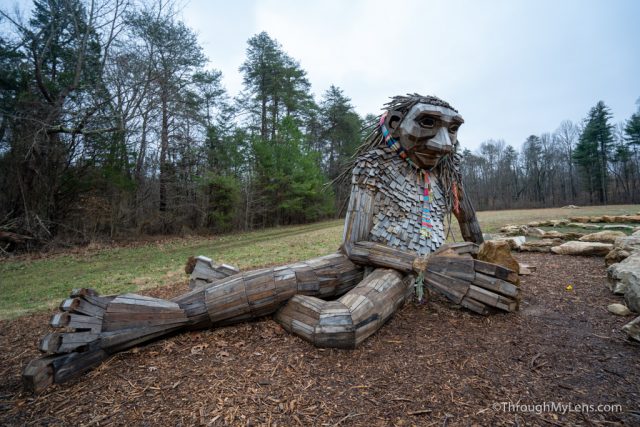 Located about 30 minutes south of the city, the Bernheim Arboretum is a large forested area with lots of hiking trails and bike paths. The main attraction currently are the forest giants, which is an art installation that features three large giants located throughout the park. You can take a mile and a half round trip hike to visit all three, following the yellow footsteps along the path which goes by each. Also, by the second one, there is a full fairytale that goes with the giants, and I imagine it would be fun to read and explore with children. Check it out before they leave, currently scheduled for the end of 2020. 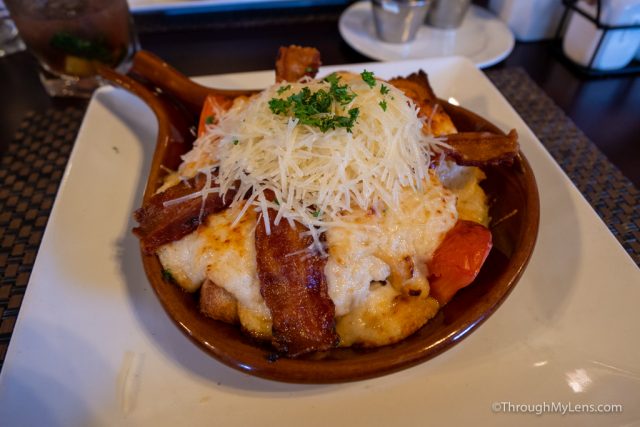 The Brown Hotel has been a historic part of Louisville since 1923. The hotel is immaculate with a beautiful exterior and lobby. We stopped by to try the Hot Brown though, which is the city’s famous dish that was made right in this hotel. The recipe has white bread, turkey, bacon, and a decadent cheese sauce, all baked in an oven. It is heavy and tasty, well worth the try. Also, the chef is now making a pasta version if you want to try a new take on the dish as well. 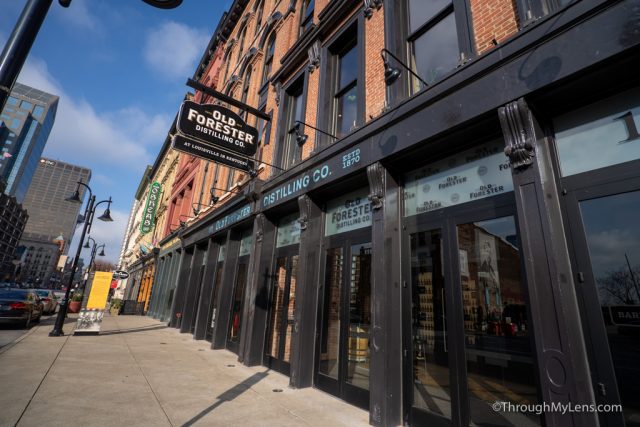 The Whiskey Row section of downtown is fun to explore a little bit or to have a meal at. It is right next to the troll pub I mentioned above, and it is also home of Old Forrester, a famous distillery on the bourbon trail and the maker of the mint julep that is served at Churchill Downs. Plus you can visit Doc Crows if you want an excellent southern meal, or The Original Impellizeri’s across the street if you want to try Lousiville style pizza. This pizza has a layer of cheese, then toppings, then more cheese then more toppings. All of this is right next to the KFC Yum Center where basketball and hockey games happen. 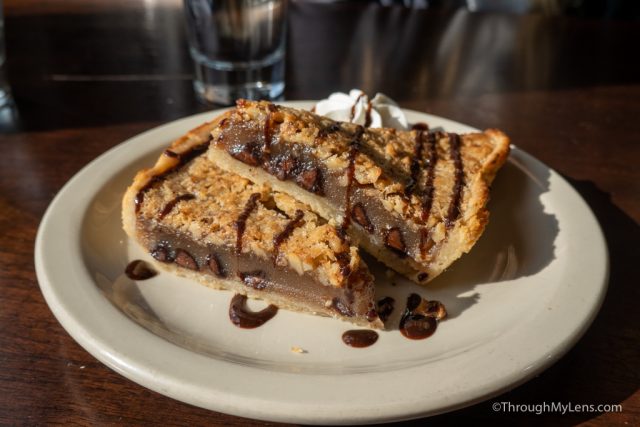 Derby Pie is famous in Louisville, and it is made by Kerns Kitchen and sent around the city to a few select restaurants. We tried it at both The Brown Hotel and Doc Crows, and this chocolate, walnut based pie is worth finding in Louisville. Also, there are many different takes on Debry Pie around the city as well, like the Derby Bar at Please and Thank You Coffee that is worth trying as well. 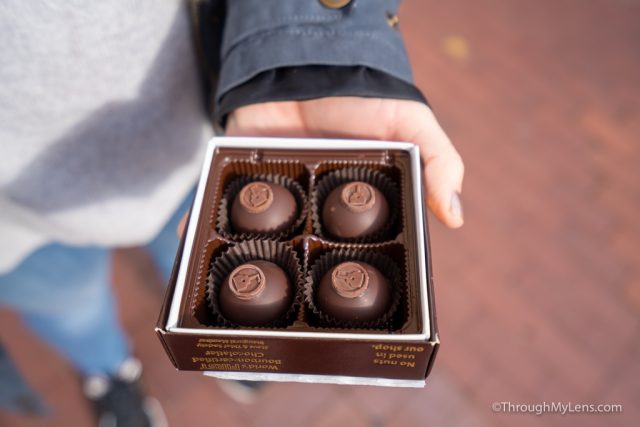 Bourbon Balls are as well known as Derby Pie is in Louisville. The main spot to go for these is Muths Candy, as they have been making them for almost a century. However, if you are looking for something unique in the same vein, go to Art Eatables, which makes bourbon chocolates with different bourbons from the trail. It is fun to walk through the shop and see all of them, plus you can buy a taste of the trail which features chocolates from many different distilleries so you can taste the differences.

Lastly, I didn’t make it to Mega Cavern because it was closed, but it is something to look into if you make it to Louisville as it has underground ziplining and other tours.

That’s it for my recommendations in Louisville. Let me know what I left off in the comments!