Located about 7 miles outside of the city of Ketchikan is a beautiful state park dedicated to the totem pole history in the area. For both the Native Americans and settlers in Ketchikan, totem poles were a huge part of the culture and one that I really enjoyed seeing on my visit. I was able to make it here via public transportation from my cruise ship so you do not have to take an excursion if you are ok with a public bus, here is all the information.

Without booking an excursion that goes there from the boat you can grab a shuttle bus from downtown for $1 each way. There are a few spots in town to get the shuttle but I grabbed it from the visitors center then just got dropped off in downtown after visiting the park. The shuttle takes about 25 minutes from downtown to the state park itself and it took about 2 hours total for this adventure.

The park itself was free to enter when we were there but all of the information and visitor centers were closed so we just went on the short loop ourselves. There are about 20 different totems in the park as well as a large clan house that was built to resemble the Native American architecture in the area. The loop is about a half mile to complete and it can be as short or as long as you like. Here are a few of my favorite totems. 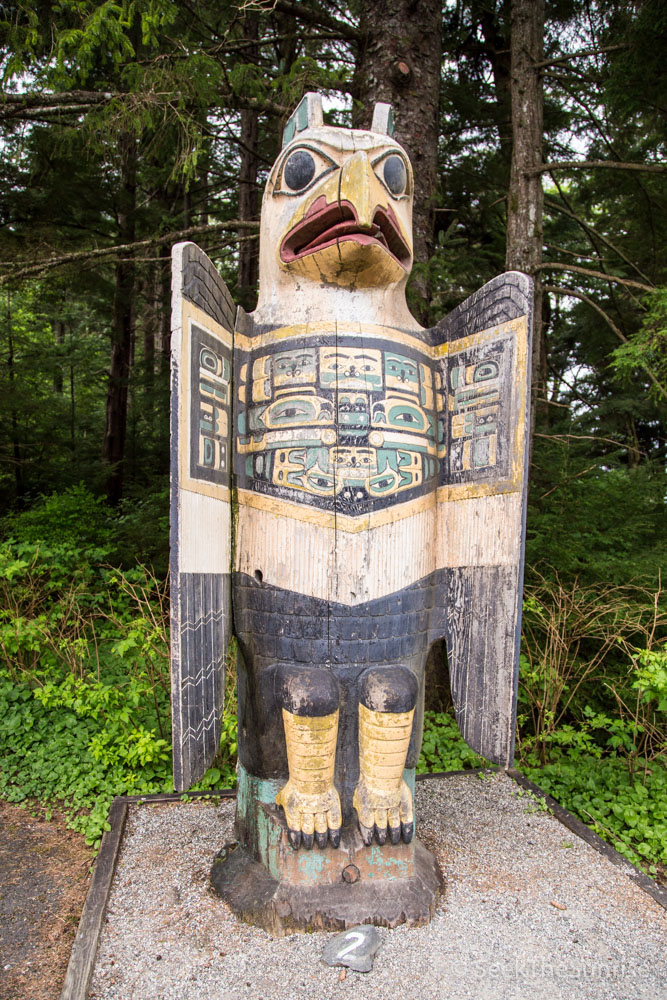 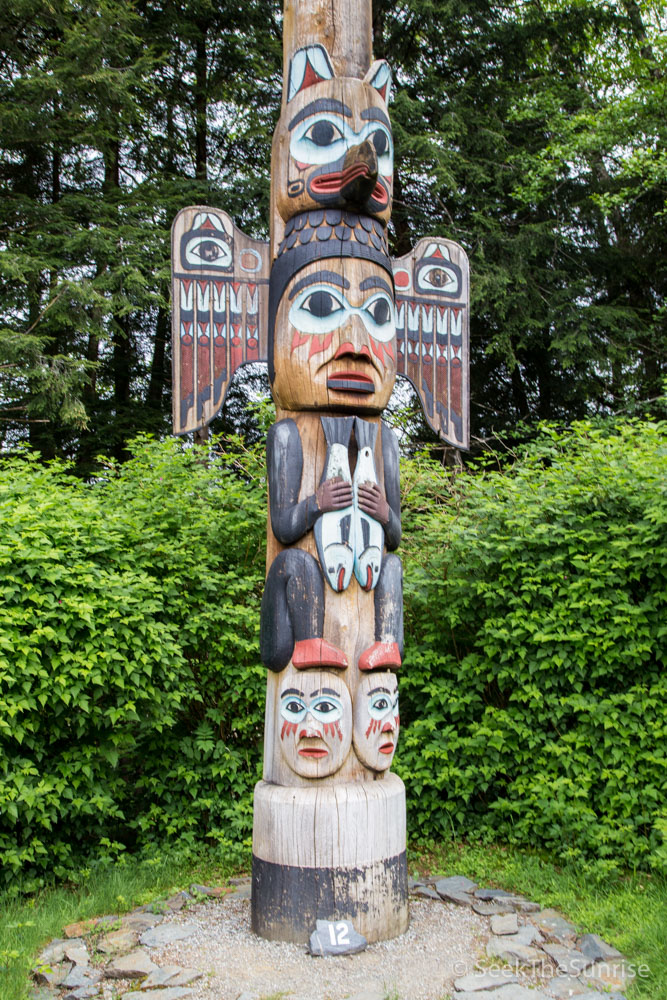 History of the Park

Taken from this site:

With the growth of non-Native settlements in Southeast Alaska in the early 1900’s, and the decline of a barter economy, Natives moved to communities where work was available. The villages and totem poles they left behind were soon overgrown by forests and eroded by weather. In 1938 the U.S. Forest Services began a program aimed at salvaging and reconstructing these large cedar monuments. By using Civilian Conservation Corps (CCC) funds to hire skilled carvers from among the older Natives, two things took place: young artisans learned the art of carving totem poles, and totems which had been left to rot in the woods were either repaired or duplicated.

By the time World War II slowed down the CCC project, the community house and 15 poles were in place. The name of the site was then changed to Totem Bight. At statehood, in 1959, title to the land passed from the federal government to the State of Alaska, and the site was added to the National Register of Historic Places in 1970. At that time it came under the management of the State’s Department of Natural Resources for continuing historic preservation treatment by the Division of Parks and Outdoor Recreation.

As you can see in the above history, there are still people dedicated to preserving the art and the totems. There is an area in the park dedicated to that where you can see them working on the totems (only at specific times), and see the pile of totems waiting to be worked on.

The clan house was an amazing thing to see in the park. We had seen a replica of it in the museum so it was nice to see the actual one up close. The house has three totems in the front as well as a small walk through entrance at the base of center totem. It was only about 4 feet tall so you had to duck to enter.

The inside was massive since it was a family dwelling and it has no windows as that made it more fortified when attacked from other tribes.

The inside had a few totems in it as well and it was one of the best things we saw in the park, easily worth the trip up here to see it.

From the clan house you can head out to the beach and I would recommend you do it as it had a lot of different colored algae that covered the rocks and it looked over an amazing inlet.

There was even an old boat sitting in the water that I really enjoyed taking a picture of as the juxtaposition of the urban decay with nature was serene and beautiful.

The Rest of the Totems

After walking along the beach we headed back in to finish our tour of the park. There were about 10 more totems to see ranging in size from 10 feet to 60 feet.

I even found one that had a plain pole with a random animal on top looking down on you, I am not sure the significance but it was unique.

After walking through the forest we were back at the parking lot where we waited for the bus to come back and pick us up.

All in all it was about one hour for the whole walk and that was with taking our time. You could have spent less time if you were rushed and still wanted to see it.

While this park was nothing super crazy I really enjoyed being able to see the history and all of the beautiful totem poles in the area. It is a fun way to get outside of the tourists and city and experience a little bit of the culture. Check out the rest of my recommendations for what to do in Ketchikan here.

Tracy Arm Fjord: The Most Beautiful Part of the Inside Alaska Cruise

Juneau Alaksa City Guide: How to Explore Without Any Cruise Excursions